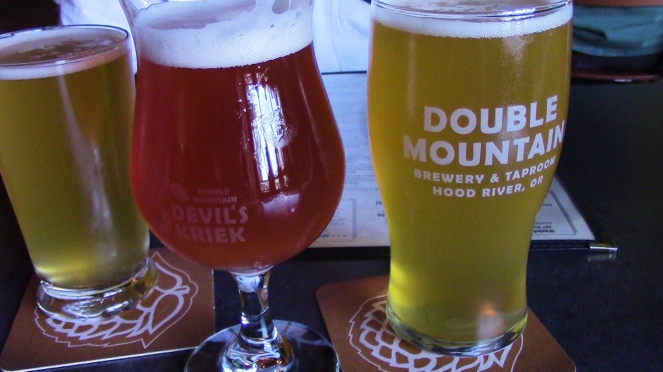 Tell me if this doesn’t completely entice you to want to drink a beautifully crafted Oregon beer:

“Welcome to a place where the water runs pure and clean, from snow-capped mountaintops through lush green valleys. A place where hops grow in such abundance, their harvest is celebrated each autumn by beer makers and beer lovers alike. A place with a metropolitan area that has more craft brewers per capita than any other place on earth. Is it a dream? No. It’s Oregon, home to Oregon Craft Beer. And we’ve been waiting for you.”

This was brought to you by the Oregon Craft Beer Guild.

Oregon is home to over 136 brewing company operating in 61 cities across the state. Did you know that in Portland alone, there are 54 breweries—and over 70, if you include the entire metro-area?  Portland has beat out Cologne, Germany, for the highest number of breweries per capita and has become the Microbrew Capital of the world.  For my German husband, this revelation is a serious blow to his ego.  Good thing for us, we live in Oregon!

Well, if you haven’t heard of Oregon beer, it is time to pay attention. Oregon is home to craft-brewing pioneers such as Deschutes Brewery, Rogue, Hopworks Urban Brewery, Santiam Brewing, Widmer Brothers Brewing, McMenamins, and Full Sail Brewing Co.—all of which make incredible beers that are well worth the trip to visit.  Oregon craft brewers make a wide range of beer styles, so there is always going to be something for you.

Given all of this, it is not surprising that Portland has been chosen as the first place for the launch of the film CRAFT this Thursday, April 3, 2014, at the Hollywood Theatre in Portland.  It will be the first of a multi-city tour; click here for more information on upcoming stops in Denver, Fort Collins, Austin, Oakland, and San Diego.

If you are new to the craft beer scene, this film follows a Cicerone (a beer expert— Cicerone is to beer as Sommelier is to wine) by the name of Craig Noble on his coast-to-coast once-in-a-lifetime journey, from his start as an apprentice at a farm brewery, to his beer schooling in Vermont and then to the development of his own farmhouse ale recipe.  This documentary film also takes a look at how breweries are taking on the mandates of quality, creativity, and integrity expected in this industry and the passion required by the people behind these hand-crafted beers.  Enjoy the trailer!

I am just now discovering all there is to offer in this great foodie-and-beverage capital of the Pacific Northwest.  Local is what is supported here, and Oregonians are very loyal to all things local. Furthermore, if your local brewery is putting on something that supports local causes (as Santiam Brewery supports the local Humane Society), Oregonians will be there.

From start to finish, the beer making process

If you are coming to visit Oregon, make sure to save the dates of upcoming events in the area:

If you are looking for great events in your own neck of the woods, visit the Beer Advocate for more information.

A few of my favorite local Brewers

Come support some of the local Oregon Breweries. If you aren’t in the area, take note of these great places, and add them to your Must Visit list!

There are a few of my favorite places:

Check out this great page for more info on all there is to offer in Bend: BeerMeBend

There are tours for everyone here in Oregon. Choose your own adventure below:

About the author: April Yap-Hennig

April Yap-Hennig is a wine lover and marketer with 12 years of experience in International Marketing and Communication in Europe and the United States, and with life experience also in the Caribbean and South America. She holds a Masters in Viticulture and Enology from the University of La Rioja, Spain, an MBA from Purdue University, and B.A. from University of Utah. She is also a Certified Wine Sommelier from the International Wine Guild in Colorado.  April was born in Utah, raised in the Dominican Republic and Ecuador, and has lived and worked in The Netherlands, Germany, Switzerland, and Spain. Her love of wine started when she studied in La Rioja, Spain, during her undergraduate studies. This is where she fell in love with the country, the region, the people, the culture, and, finally, the wine–thus changing her life and eventually her career.

She is now the co-founder and owner of Epicurean Media, a beverage-and-food artisan public relations and marketing consultancy; she also founded and writes the Sacred Drop Channel at www.sacreddrop.com. She is forging a new future in Oregon with her husband and their hilarious French bulldog, Guapo.

My Adventures in Wine

All text in this blog is the property of ©April Yap-Hennig. Unless otherwise specified, if you want to use any material, please contact me for further discussion. If you have any questions, please contact me via e-mail or the comments function.